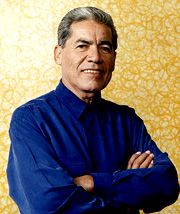 Share photo gallery
"Ruben Ramos [has] developed a solid reputation as one of the smoothest singers and classiest bandleaders in the history of the genre."Ramiro Burr-The Billboard Guide to Tejano and Regional Mexican Music

Born in Sugarland, Texas, Ruben Perez Ramos now sits at the helm of a family musical legacy borne over 80 years ago. This legacy - El Legado - is set with traditional Mexican roots, was infused with the big-band sound of the 1940s, heavily influenced by blues and rock, and is now perched at the pinnacle of La Onda: Tejano.

At the start of World War II, five of the Perez brothers went into the military.uben's grandmother proudly displayed the small banner with five stars representing five sons in service during the war. The Serenaders took a break.


Meanwhile, Ruben's father, Alfonso Ramos Sr., worked the cotton fields and the railroads; he also played the fiddle while his mother, Elvira Perez, played the guitar at family gatherings. At the end of World War II, Ruben's uncles returned to take up the legacy. Uncle Justin re-formed the band as Justin Perez and His Ex-GIs. In a few years, they had established themselves as topnotch, big-band orchestra in the 1940s, complete with sit-down horns, music stands, dark suits and ties, and a sound consistent with the times. This was the beginning of the end for any regular day-job for Ruben and his five siblings! When Inez, Elijio, Alfonso, Ruben, Joe and Roy came along, picking cotton was the way of the world - help the family, pay the bills - but the musical legacy would not wait long. These kids had "talento".

The Evolution
Ruben's sister Inez had joined the band as singer in 1947. Then, in his early teens, Ruben's older brother Alfonso Ramos Jr. joined their uncle's group. In the mid 1950s, the band then became the Alfonso Ramos Orchestra. Ruben continued with the band on weekends, increasingly singing English cover R&B tunes, even as he landed a "good job" with the state insurance department. Now, all five Ramos brothers - Alfonso, Elijio, Ruben, Joe and Roy - were performing. As the orchestra's drummer, Ruben performed throughout the 1960s with Alfonso's band. The band played a mix of tunes, from cha chas and cumbias to boleros and rancheras. Ruben provided the vocals and the push to many of the English songs the band played.

The Next Level - The Revolution
In 1969, Ruben's brother Roy made a move to spread the Ramos' family legacy. In short time, Ruben joined him as the new band's front man. Brother Alfonso's orchestra was at the top of its game and Ruben was in a position to maximize the talent available from the Ramos brothers. He formed what would become the "Next Level' of the family legacy - the Mexican Revolution. But he also faced a major crossroad in his career. It was time to either quit music or go into it full time. To do anything less would mean being relegated to the minor leagues forever. Fortunately for Ramos, and perhaps the industry, he jumped in full force and never looked back. The name Mexican Revolution was picked, Ruben explained in later interviews, because, among other reasons, the '70s saw the emergence of the Chicano and civil rights movements. During that period, the band played the Chicano circuit that ran from Dallas-Fort Worth to the Rio Grande Valley, recording a number of albums on a series of independents. By 1981, "Tejano" had become the new term for the music and Ruben changed the band name to the Texas Revolution because he felt Tejanos were getting an identity in Texas.

Ruben Ramos: El Gato Negro is Tagged!
In 1985, Alfonso and Ruben reunited for a series of albums that included Back to Back, Again. In 1987, Alfonso and Ruben were named best vocal duo at the 1987 Tejano music Awards. By this time, Ramos had scored with the regional hit "El Gato Negro" (The Black Cat), which also became his nickname.
Not Your Everyday Tejano - What's Different?
In the '90s Ruben continued playing with a live horn section, eschewing the trend by many bands to substitute synthesizers and keyboards. "I'm a horns man" explains Ruben. "There ain't nothing like a wall of sound, real sound, coming at you". This characterizes the sound of El Gato: true horns, real drums with crashing cymbals, accordion so real you can hear the clicks of the buttons - all delivered by the master musicians of the Texas Revolution. Ruben's performances are also punctuated by sheer presentation. The Tejano uniform of jeans and starched shirts is cool, but it ain't El Gato's style. "Ruben Ramos looks more like a senator than a musician" wrote one reporter. Ruben humbly states that people work hard all week, then they spend their hard-earned money to go hear a great concert. "If they can spend their money to hear me, then I can dress for them. I owe Tejano fans that respect." says Ruben.

Performance
In January of 1998, Ruben and the Revolution were inducted into the prestigious Pura Vida Hall of Fame. In March of 1998, Ruben was inducted into the Tejano Music Awards Hall of Fame. On awards night, Ruben insisted his band perform live; all performances by other artists were lip synched (the awards were being video taped for TV broadcast - lip synching cut down on mistakes). Awards organizers agreed to have Ruben perform live with his band, but they would have to be the last award of the night. Ruben and the Revolution performed - live - to a still-full arena at 1:15 a.m. Later in 1998, Ruben Teamed with David Hildago and Cesar Rosas (of Los Lobos), rocker Joe Ely, country legend Freddy Fender, accordion master Flaco Jimenez, and country crooner Rick Trevino to form Los Super Seven. Los Super Seven's self-titled CD earned them a Grammy award for Best Mexican American Performance at the 1999 Grammy Awards. In April of 1999, Ruben and the Revolution received the Best Male Vocalist and Video of the Year awards at the Tejano Music Awards.

The Legacy Continues....
Changing the band's name back to The Mexican Revolution, Ruben Ramos continues to spread the word on tejano. In December 2005, Ruben will release his latest CD entitled "Reloaded". We forsee from the music industry and the fans overwhelming, adding to his legendary status. The cool and smooth sound of one of the hottest horn sections in Texas, the selection of songs, combined with Ruben's distinct and sincere voice, promises to be one of his best CDs to date.